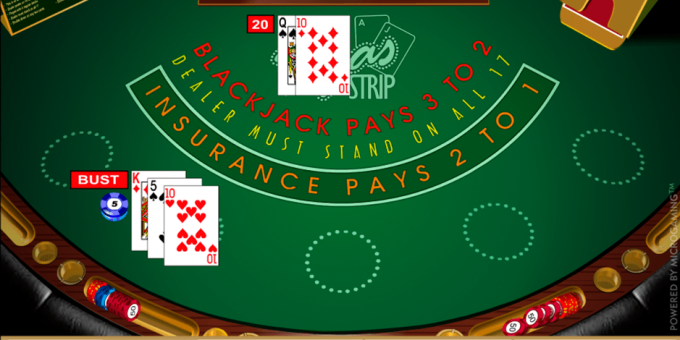 Certainly the most popular casino game in the world, and the second most played card game, Blackjack is a staple in both online and land-based casinos. Easy to play, with straightforward rules, the game is the favourite choice by many punters also due to its lower house edge and better chances of winning.

Blackjack was based on an ancient Spanish card game called veintiuna (Spanish for twenty-one), and the first accounts of this game can be found on a 17th century book by Spaniard writer Miguel de Cervantes. The game arrived in England by the end of the 18th century, and in the 1900s, the first set of rules was created, as the game was played under the name Vingt-Un. During the Gold Rush, in the United States, the game became very popular and was renamed to Blackjack, which is a term for sphalerite, a mineral found by prospectors in gold and silver deposits.

Despite having simple rules, blackjack is not a simple game, and to become a good player and be able to improve winnings, you must study the game and its many strategies and approaches. You must clear your game of mistakes and useless actions, and never deviate from the basic strategies or play hands that present the lower mathematical expectations.

But, apart from studying the game, there are a few simple steps that you can follow to avoid mistakes and boost your results, such as identifying the dealer’s upcards and selecting games with optimal payouts. At USGamblingSites.com/casinos/, you can find the casinos with great Blackjack tables and the best payouts.

Today, most Blackjack tables featured at land-based and online casinos offer two different payouts for natural blackjacks (ace, plus 10, J, Q, or K), either 3:2 or 6:5. Even though the 6:5 payout might seem higher, you should always opt for tables with a 3:2 payout. This ratio means that a $100 wager will get a $150 payout, meanwhile the 6-to-5 ratio means the same bet would only get a $120 payout. Besides, you would only get the 6:5 payout on amounts divisible by five, any overage is paid off at even money.

The house edge, which is the amount of money players lose on average over time, is also different with each payout. The house advantage for 3:2 tables is usually around 1 percent, meaning a $1 loss for every $100 wagered. As for 6:5 tables, the house edge increases to 2.5 percent.

Although these are general guidelines, there are some exceptions to this strategy depending on which hands are at play and the number of decks being used in the game. So you must keep studying the game to get a better understanding of its many approaches.

A common mistake among inexperienced players is to disregard studying the game and the strategy chart. They eventually end up making silly mistakes, like splitting a pair of 10s, that decrease their chances of winning and could be avoided by getting familiar with the chart.

The strategy chart is a colour-coded guide that shows players the correct action for each possible hand according to the dealer’s upcard. Running along the left side, you can find the player’s hands, and the dealer’s upcards are shown across the top. You just need to scan down and find out whether you should hit, stand, split, double down or surrender.These charts are a very helpful tool for novice players and beginners who are playing online Blackjack, since there’s not much pressure to make quick decisions. But even professional players make use of them sometimes.